TEACHING KIDS TO VALUE THEIR STUFF 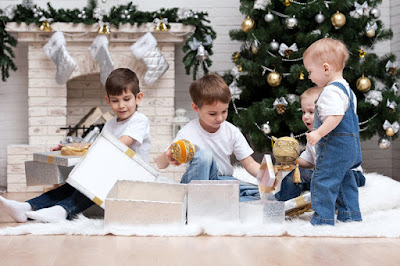 Oh my goodness, how do you teach your kids to appreciate their toys when they have been inundated with so many at Christmas time? I remember visiting a friend just before Christmas one year and being appalled when I saw just how many gifts were under the tree, covering about a 4ft circumference round its base! With such an overload, how can we teach our kids to value all this ‘stuff’?

Have you ever been unable to walk into a store or into your house without almost tripping over bicycles parked or thrown down on the sidewalk right outside the doorway? What about trying to drive out of your garage while scooters, bats, balls, helmets and gloves have been left strewn all over the place? Aggravating, isn’t it! I wonder how all that stuff gets there? Perhaps Gremlins have been playing in the night hours while our kids are asleep and get whisked away on the moon shuttle at the crack of dawn before they can put things away again!

So, why do kid’s leave their stuff everywhere? There are many reasons and here are just a few. Kids do not value gifts when given in great quantities. Neither are they inclined to develop a sense of gratitude when there has been no personal effort put in to obtain them. Sometimes kids get so much stuff there is not enough storage space so it lies out. In this case it would be an excellent idea to only put 3 or 4 toys/games out at any one time so they learn to appreciate all the toys they have. Many times parents give kids ‘stuff’ to replace TIME they don’t feel they can give. A survey was done just after 9/11 and the results showed that when asked what kids most wanted from their parents, the unanimous answer was TIME and LOVE.

Kids can be careless with their stuff when they are not taught how to care for it. When given gifts such as pets, sports gear, or toys, it is a golden opportunity for parents to teach some important concepts – gratitude, commitment, a sense of responsibility, trust, the need to nurture (in the case of pets), the safety of others, correct care or maintenance and the willingness to share. Kids also need to be told the consequences of not following the rules of looking after their gifts, toys or pets. Confiscation of a much loved toy does make a child think more about the privilege of having been given the gift, and it also teaches the importance of obedience. My friend Ron told me that he warned his young son several times not to leave his new bicycle where someone could trip over it. The warnings went unheeded until one day Ron got a hacksaw out and chopped the new bicycle in half. Now, while I thought such an action was extreme, and would have given the bicycle away to some grateful child, Ron’s son did get the message in the end - too late.

There is nothing wrong with giving kids gifts. The problem lies with either giving too much stuff, or in not teaching our kids the responsibility that goes with ownership. Next time you have to step over bicycles and toys that have not been put away safely, ask yourself – why do my kids leave their stuff everywhere? The blame is not always with the kids. They only develop careless attitudes because they have been allowed to. It is never too late to train our children to be thankful and responsible. And lastly - no amount of stuff will replace the personal love and nurturing of a parent. 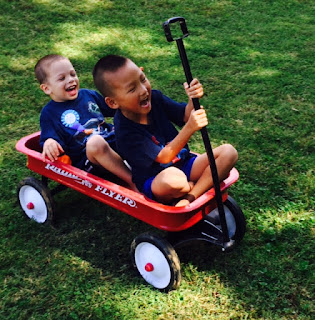