It has been indeed alarming to see and hear the backlash occurring because of the choice of leadership in our country this week.  This blog is not the place to discuss personal preference with the leadership itself, but it is most disturbing to witness the violence on the streets and the reaction of students now that the opportunity for the first woman President for the USA has not materialized. Some students are so distraught that they are begging their professors to allow them to go to a crying room, or skip or postpone mid-term exams because they are far too upset to think straight.

NEW YORK POST: Liberal college students, devastated over the results of the election, have been begging their teachers to cancel classes and midterm exams — and one Yale professor happily obliged on Wednesday.

A friend on Face Book made these remarks:

“When I first read about this yesterday, I was greatly disturbed. The students’
Professor is doing his students a complete disservice in not allowing them to
learn how to function in the wake of disappointment and further encouraging
their entitlement mentality. In the real world we have bad news every day and
we have to learn how to work through that news. If the students were properly
prepared for the exam, and this being real life, it would make no difference.

College grades are good, but even more important is navigating life. The best
grades in the world won’t matter if you perform poorly on a job (due to some
major disappointment). I’m concerned that students who are being thus
mollycoddled, may never meet their highest potential in life.”   Karen Wevick

We need to teach our kids to act responsibly despite what is happening around them.  I am not talking about a personal tragedy, but rather, general national or territorial disturbances.  It is not appropriate to create a riot or break the law to protest decisions.  Peaceful demonstrations are one thing, but causing damage to property, injury or even death to prove a point is not the way to handle it.

We need to show our kids how to work through disappointments, injustices and disagreements.  They will mirror whatever we do.  They need to learn from us that everything is not always going to go our way.  Bullying behavior, violence and hate speech solves nothing.  We need to stop and think hard before lashing out against a situation.

Written by Sally Burgess with comment by Karen Wevick
Posted by Unknown at 2:54 PM No comments: 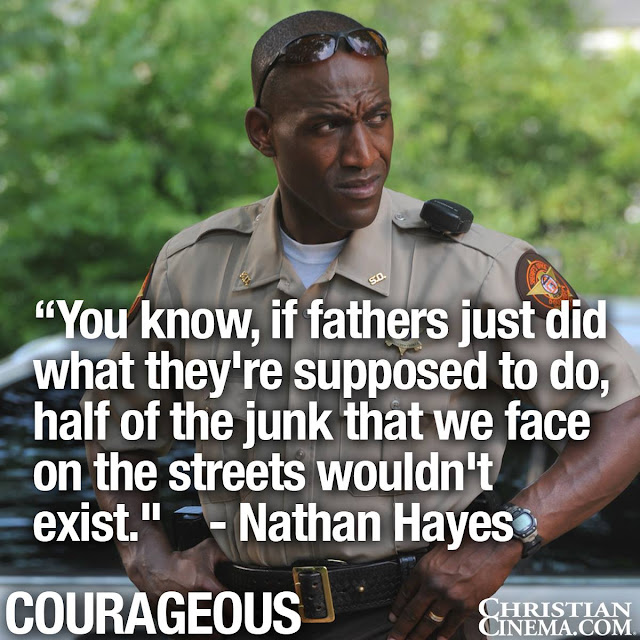 ‘Fatherlessness’ has caused repercussions in our society that we did not anticipate twenty years ago. While many marriages have always broken down, divorce and reconstituted marriage is almost pandemic in its proportions. Mothers have born the brunt of raising children alone and have generally done a great job. However, the lack of fathers in homes has led to a generation where a percentage of adolescents are running wild in the community, some even killing each other. Father modeling is just not available to many youths who so desperately need a positive example to exemplify what ‘being a man’ and ‘being a father’ is all about.

Many mothers have overindulged their sons, partially as an over-compensation for not having a father around. Sons are not expected to pick up after them selves, to cook, or to do other household chores. This is hardly fair on the woman they eventually marry who certainly doesn’t want to be the man’s mother figure and do for him what he has expected his mother to do.

Further to this, even fathers in good marriages have not always had effective modeling from their fathers and we men tend to pass down to our children what we know and have experienced. Many baby boomers’ parents were influenced by child psychologist, John B. Watson. He was influential after World War 1 and right up to the post WW2 era. His philosophy was one of austerity and lack of affection by parents towards their children. To him it was sufficient for a parent to shake their child’s hand in the morning and to give them a peck on the forehead in the evening while in their bed “lest they drown in mother love.”

THEN THERE WAS SPOCK!

Spock came forward with his unmitigated child-centered philosophy and the western civilization swallowed it hook, line and sinker. It was so refreshingly different and empowered parents to have a relationship with their children they felt they could never have before. Stemming from the indulgence of the Dr. Spock (not Star Wars!) era many baby boomer fathers are the result of our parents’ pendulum swing to the opposite extreme. From authoritarianism to indulgence. From a position of parent centered to child centered family management. From being seen but not heard, to children having input into family life. From being the child in a family to being in charge.

The hippy era with its ‘free love, drugs and rock ‘n roll’ is seen by many as the result of the ‘anything goes’ culture that arose out of the Spock epoch. The so-called X and Y generations have suffered the fate of that indulgent era as parents, especially fathers, enter marriage with so few skills to successfully manage their families.

If this seems all gloom and doom let me say that there are men who have risen to become the responsible adult models their children need. This does not just happen. It takes skill and practice. Fathers, our example so often leads to our boys becoming great fathers. This will likely become generational.

The leadership of fathers does indeed shape our nation.

There are many resources available to help men in their fathering role. If you do not feel you are in parental control of your family, then seek help.

Written by Brian Burgess, Forefront Families
Posted by Unknown at 1:36 PM No comments: 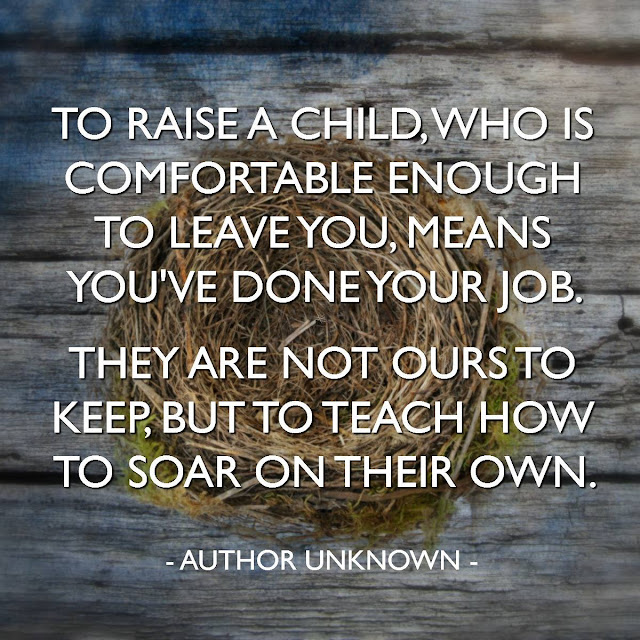 I think every parent struggles with letting their child go, especially mothers. It is not just once, but many times through the years we find ourselves wanting to hold onto our precious children. It starts from when we first leave them with a sitter to the time they walk up the aisle.  I vividly recall my 3 year-old son’s first day at Kindergarten. I was so worried that he would be traumatized by me leaving him with complete strangers, I could not pluck up the courage to walk away. My mind was made up for me when the caregivers told me to ‘just go’!


Then there was the first day of school where I thought he would be lonely and frightened and the first game of football where I worried he might get hurt. There was the first time he failed, the first girlfriend and finally the day he married. I suffered some of the same personal trauma with my daughter, although I was a little more prepared for those feelings of ‘loss’ the second time around.

WHY IS IT SO HARD TO LET GO?

Obviously, we mothers never believe anyone can care for our little Johnnie/Susan the way we can. We know their needs, their moods and we sense when they are starting to become anxious. We have a natural instinct to care for and protect our little ones at all cost. If I am really honest, I think I enjoyed being the answer to my child’s every need. I liked to be needed, to be the first one my kids turned to when they wanted to be comforted or needed anything.

As they enter the school system others begin to assume authority in our kids’ lives. We are no longer their only source of help, care, comfort and protection. Beyond our immediate sphere of influence we cannot always be there to protect them. This becomes disconcerting for a mother, especially when tales come home from school and we only hear one side of the story. Many a time, I offered to go down to the school waving my imaginary purple umbrella and sort out some offender. That threat became a joke because my kids would always howl, “No, Mom! PLEASE don’t come to school.” What? I was no longer viewed by my own kids as their champion, their only solver of all problems?

I was beginning to realize I needed an attitude adjustment. It wasn’t that my children no longer needed me. It was the fact that they were growing older and were beginning to face the world and solve problems without me, finding other sources of help, e.g. their football coach, their teacher, their friends and maybe even their friends’ parents.

WHAT MAKES IT EASIER TO LET GO?

The first thing we need to be assured of is that they will make wise choices and clearly recognize that there are both positive or negative consequences for each action taken or word spoken. Home is a safe place to practice becoming independent. The danger is in constantly anticipating their problems and answering them without giving kids a chance to fly on their own while they are still in the safetly of home.

Once we recognize that our role has changed we need to re-establish a life of our own and not rely on our children to fulfill our needs. They should have ceased being the center of the universe as preschoolers. All through our kids’ growing up my husband and I were working on our interests as well as caring for them. We had a dance band. We had a small farm. We studied at University. We had full time jobs and we were fully engaged in numerous church activities. By our children living in a constantly revolving and stimulating home environment, we taught them how to set and achieve goals, to problem solve, deal with failures and most of all how to live and enjoy life.

There is no denying the internal turmoil we have when we see our child give their heart to another. I defy any mother to tell me she did not shed a tear on her child’s wedding day. Yet, that special love a child has for his/her parents will always be there as long as we have not smothered them from the beginning, to the point that they wanted to ‘escape’.

Our kids need to know they go with our blessing and that we will always be that ‘go to’ person when their other trusted resources don’t have the answer. Our adult children have become our best friends. I hope yours are or will be, too.

She'll take the painting in the hallway,  The one she did in jr. high
And that old lamp up in the attic,  She'll need some light to study by.
She's had 18 years to get ready for this day
She should be past the tears, she cries some anyway

Mother sits down at the table, So many things she'd like to do
Spend more time out in the garden, Now she can get those books read too.
She's had 18 years to get ready for this day
She should be past the tears, she cries some anyway. 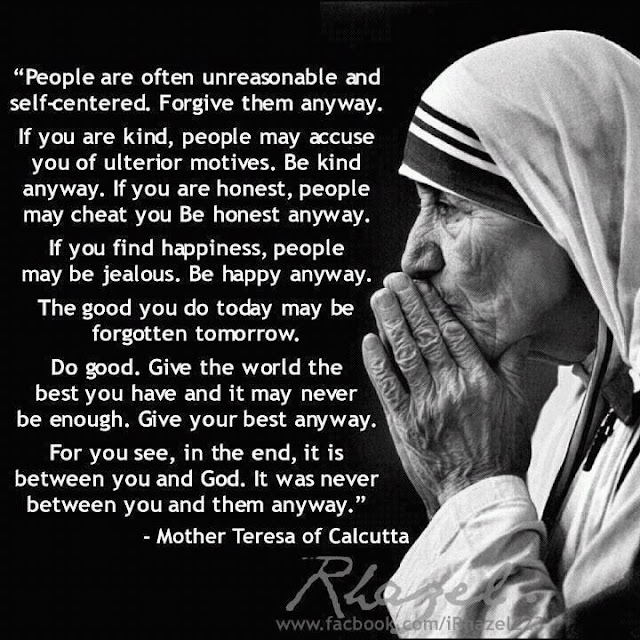 What incredible values to adopt in our families.