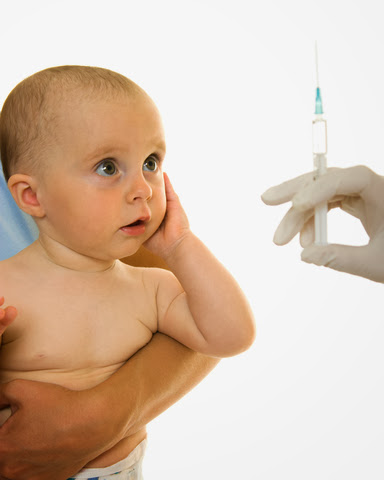 The question of whether the risks are greater than the advantages regarding child vaccinations is a hot topic. A child in the womb is naturally protected from diseases and, once born, that protection is partially continued through breastfeeding.

Over the years vaccination schedules have changed due to the risk of exposure to diseases of the time.  For example, polio and TB were a real concern in earlier years and have been drastically reduced due to vigilant vaccination.  Currently, the vaccination schedule in Western countries includes Diphtheria,Tetanus, Whooping cough, Polio, Hepatitis B, Haemophilus influenza type B, Pneumacoccal conjugate,  Rota-virus, Measles, Mumps and Rubella.

THE ADVANTAGES OF HAVING VACCINATIONS:
a) Personal protection from serious diseases.
b) Prevention of the spread of these diseases through the community.

THE DISADVANTAGES OF HAVING VACCINATIONS:
a) Possible lifelong harm for some from the content of the vaccines.

THE POTENTIAL DISADVANTAGES OF NOT HAVING THE VACCINATIONS:
a) Serious possibility of contracting the diseases.
b) Personal harm from the effects of the disease.

In 1986 the National Childhood Vaccine Injury Act was passed in response to a large number of lawsuits being filed claiming vaccines were causing adverse reactions including brain damage and death. The Act served to shield medical professionals and vaccine manufacturers from liability if an individual suffered injury from receiving vaccines. The Act mandated that vaccine injury claims be filed with the US Court of Federal Claims rather than filed directly against physicians or vaccine manufacturers in civil court. The Act created an Office of Special Masters to make rulings on petitions for compensation. Unlike civil court, those filing injury claims are not required to prove negligence or failure to warn - they only need to prove that a vaccine caused injury.

Link to Autism:
On July 9, 1999, in response to growing concern over a link between vaccination and autism, the American Academy of Pediatrics (AAP) and the US Public Health Service (PHS) recommended that Thimerosal (a preservative containing mercury - a known neurotoxin) be removed from vaccines "as soon as possible."

Link to brain damage:
Between 1988 and 2009, the United States Court of Federal Claims Office of Special Masters has awarded compensation to 1,322 families whose children suffered brain damage from vaccines.  (We personally know a child who was vaccinated and within days suffered convulsions resulting in severe brain damage).

Please read the source below as it discusses studies and progress of arguments to and fro regarding the value of vaccinations for children.

It is a very difficult situation that young parents face, trying to decide which is the best decision to protect their children.  Will vaccinations harm or help?

All I can suggest is that there is a great deal of information on the Internet these days that will at least enlighten you.  A discussion with more than one health professional and both sides would also be advisable.  Just remember, too, that the drug companies will usually not admit liability and have copious finances to lobby against those who would try to prove links between vaccinations and damage to children.  They often report findings from research they have conducted or financed. So, how can the truth be known?

Written by Sally and Brian Burgess
Posted by Unknown at 12:28 PM