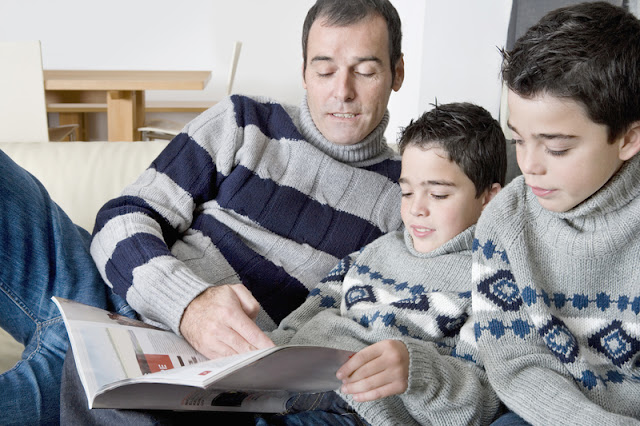 This week I will be running a Father/Son Fun Friday at the school where I work.  Already we will have around 130 fathers and sons.  At the last school I worked in I ran two of these a year until the fathers and boys were bugging me for more. These evenings were such fun.  It was so incredible to watch the expressions on both fathers and sons as they had a meal followed by fun activities.  Laughter and cheering were the hallmarks of these evenings.  As the fathers came in they shook my hand.  As they left I received many two-handed shakes and, "Thank you so much!"

The role of a father is so necessary.  Fathers have a role to uphold the discipline in the family, not to do it all, but to ensure that family values are instilled and that consequences are applied when expectations are not met.  Does this mean that a woman cannot do it?  Not at all, but she has so many other roles to play and fathers need to step up and take a lead.  The second role of an effective father is to affirm his children.  Most mothers already affirm their children in many different ways, but boys especially will go to 'the ends of the earth' just to hear their father say, "Attaboy!" or "I'm proud of you, son!"

‘Fatherlessness’ has caused repercussions in our society that we did not anticipate twenty years ago. While marriages have always broken down, divorce and reconstituted marriage is almost pandemic in its proportions.  Too many mothers have born the brunt of raising children alone and have generally done a great job.  However, the lack of fathers in homes has led to a generation where too many adolescents are running wild in the community, some even killing each other.  Father-modeling is just not available to many youths who so desperately need a positive example to exemplify what ‘being a man’ and ‘being a father’ is all about.

Partially, as an over-compensation for not having a father around, many mothers have overindulged their sons.  Sons are often not expected to pick up after themselves, to cook, or to do other household chores.  This is hardly fair on the woman they eventually marry who certainly doesn’t want to be the man’s mother-figure and do for him what he has expected his mother to do.  Further to this, even fathers in good marriages have not always had effective modeling from their own fathers.  We men tend to pass down to our children what we learned and have experienced, and this has not always meant effective father-modeling.

Spending regular, dedicated time with our children is one of the keys to growing emotionally-healthy children.  Children would rather have a less-successful father than one who is never around, one they barely know.  It's not worth the loss of relationship or the possibility of dysfunctional children.