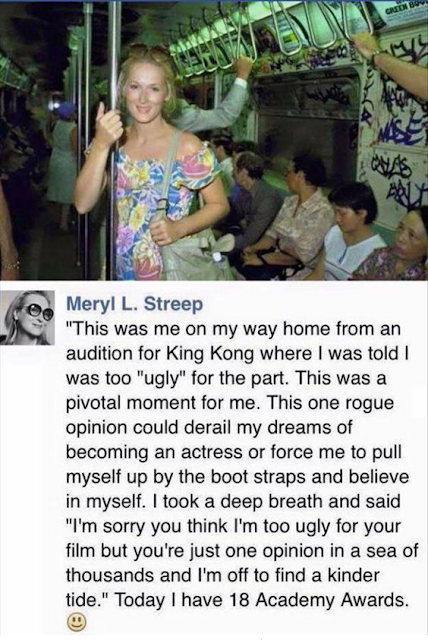 I saw this incredible little story on Face Book recently and it was so inspiring I thought it well worth sharing.


HAVE YOU ALLOWED CRUEL WORDS TO DESTROY YOUR DREAMS?

My brother-in-law had it noted on his High School Report Card that he would not amount to anything academically.  He could have given up at that stage but, instead, he completed University studies and went on to become Assistant Principal and Principal of schools.

I came across an old teacher of mine from High School.  When I told her I had just completed a Diploma of Nursing Studies and was on my way to a Bachelors degree her retort was, "But you weren't academic material!" My immediate thought was, "That's what you think! I must admit I wasn't so sure how I would go at University study when I ventured out, but I even surprised myself!

I am sure many of you have had similar experiences.  How important it is to instill in our children that one person's negative opinion (often said without thought or when they are disheartened, frustrated, angry or jealous themselves) is not necessarily anything like reality.

If you notice your kids becoming despondent, find out what has happened, take that negativity and deal with it immediately.  One idea is to write that comment or situation down on a piece of paper and burn it as a symbol of dismissal.  Then immediately put a plan in place to help them prove to themselves that they can do 'it'.  Create achievable goals.  Encourage successes and put down failures as something to learn from.  Yes, call failure what it is.  We all do fail.  We need to teach our kids to get up and keep going.

Really stoke your kids up on the dreams they might have, help them discover their strengths, find heroes to reach up to and just go for it.  Meryl did it and so can any one of us!