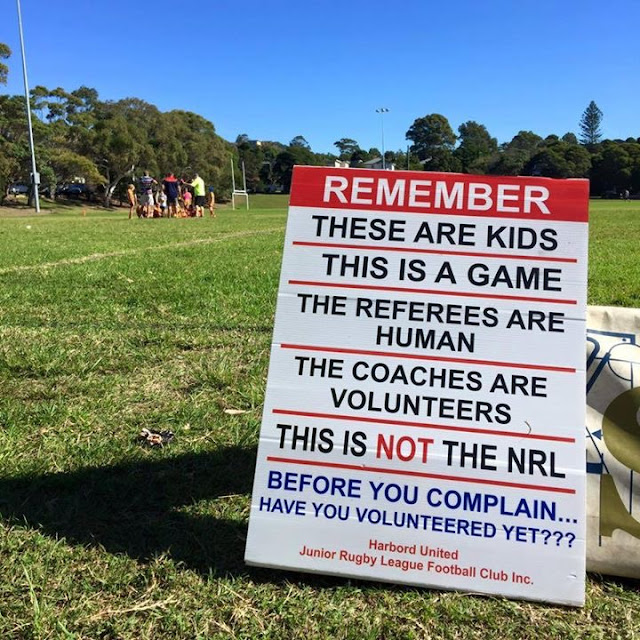 One of the funniest things I ever saw was when I went to watch my 30 year old brother play soccer.  There was an adult guy on the team who was known as a real Mommy's boy and at one point in the game he must have hit his nose because it started to bleed.  A team member on the sideline who couldn't play in that game because of an injury noticed and shouted, "Oh look, the golden boy's leaking."  He didn't see the incensed mother striding up behind him till the last second as 'golden boy's mother' started pounding him on the head with her umbrella and her purse.  It was just like slapstick comedy watching it happen.  Hilarious!

What really isn't funny, is watching parents of young children running up and down the sideline, screaming at their kids to 'run', 'tackle' or 'pound the opposition into the turf'.  Sometimes they yell at the referee, and other times they berate their kids when they come off the field for not winning the game.

My husband was an Assistant Principal at a high school in Nashville, TN, and had the responsibility for sport in the school.  He had warned a couple of dads in the gym a couple of nights about yelling disparaging words at their sons and the referee during their basketball games.  When it happened another night he asked them to leave and not come back for a couple of weeks until they could obey the directive to quit that behavior.  They objected, but they were subjected to an ejection.

Come on people, it is only a game!  Of course winning is the objective, but only one side can win.  Kids should not be made to feel bad because their team didn't beat the other one.

Encourage your kids to feel the joy of playing.  They need to learn to be gracious losers.  They will not learn this great value if it is not being modeled by parents.  'Button it' unless you can say something positive.