AIN'T THIS THE TRUTH 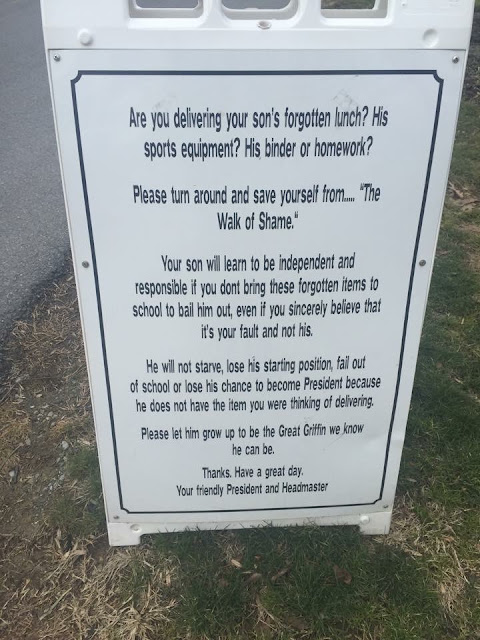 The above sign was placed in the drop off area outside the front of a school.

Let's face it, many parents have taken their kid's lunch to school so they wouldn't be hungry, or taken their homework because they didn't want their child to be in trouble with the teacher.

It starts there, but often doesn't end there!  We are not talking about the occasional brain fart our kids might have, but rather, the fact that they learn to rely on us because they know we will come and save them from the consequences of their poor memory, lack of organizational skills or lack of attention.

It doesn't begin and end with trips to school to save kids' butts.  It leaches out into every area of their lives because they soon learn to rely on us for every convenience that their self-centered existence blossom!

ARE YOU A CONSTANT RESCUER?

The root of the problem is that these parents are not expecting or teaching their children to take responsibility for their own lives and their own stuff.  We don't ever want to hear the words, "Well, you didn't remind me," or, "But that is your job, Mom or Dad!"  They need to learn from a very young age that life consists of 'give' as well as 'take' and that facing consequences helps mature them.

One summer break my husband, Brian, worked for a friend in his cabinet-making shop.  Andrew had built up a business producing high-end kitchen and bathroom cabinets.  He believed his business was booming.  He had two brothers-in-law working for him.  Matt was a partner in the business, also acting as the company accountant/office manager, while the other worked in the factory.

Not long after going back to his regular school job at the end of the summer vacation, Brian received a phone call from Andrew to say that he was going out of business.  Astounded, he asked why.  He was told that his partner, Matt, in whom he had put a lot of trust, had not paid the company taxes for three years and now the IRS wanted $40,000.  Andrew was totally devastated!  That meant that he and Matt owed $20,000 each.

Andrew didn't have that sort of money, so he decided to sell as much of the equipment as he could to recoup some money to help pay the debt.  Machinery worth well over $100,000 was sold for peanuts.  He was looking now for new employment.

How does this true story relate to the subject?  Matt didn't have the money to pay his portion of the debt either, so his father bailed him out.  The problem here is that Andrew's father-in-law had regularly bailed his boys out of trouble and they never learned to be mature, independent men and bare the consequences of their own foolishness.  They always knew that daddy would come to their rescue.

This is what can happen when we start rescuing our children early in their lives.  It often doesn't stop there and parents end up bewildered and wonder where they went wrong.  Don't be a 'Coast-Guard parent' eager to come to your kids' rescue whenever they raise their hand.